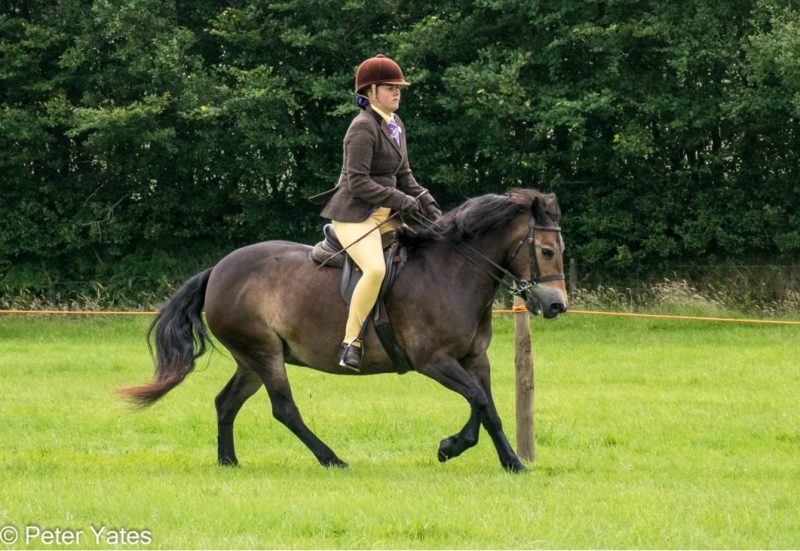 The weather gods had evidently heard that this was a special year for the EPS and granted us a mostly dry centenary breed show day, with just the occasional hint of rain, something judges, exhibitors and spectators alike were all grateful for.
The main Exford show and EPS show teams had made some major changes to the showground layout. The Exmoor Pony Show area was given much more space and had the entire top end of the show ground with pony transport being parked alongside the rings. This was a great improvement for exhibitors,
This show has always been considered the showcase for moor-bred ponies and they were well represented this year with representatives from five of the free living herds and one from a historical herd. There were also ponies from another five Exmoor based in-ground herds.
The day started as usual with the senior in hand classes in Ring 3. First in were the stallions. Five were entered, of which two were moor-bred. The first red rosette of the day went to Messrs Hodge and Walters consistent 5 year old Blackthorn Poldark who also took the Best Opposite Sex and Up Country Bred trophies at the end of the day.
Gemma and Lloyd Parry had a very good day with their moor-bred ponies. Their Hawkwell Clementine, the last foal registered to Herd 12, won the Junior Dry Mare class and stood Dry mare champion and Reserve Senior Champion to Mr and Mrs Wallace’s lovely Champion, 11 year old broodmare winner, Anchor Gretel. The Parry’s Tawbitts Mystery’s Maid won the Senior Dry mare class and Tawbitts Golden Delight, the last foal bred by the late Gill Langdon. took the top honours in the yearling class.
Mares and foals always attract an audience and it was standing room only at the ringside by mid morning. It was one of the largest crowds seen for many years in the improved and larger space between the tents and the rings. Top of the broodmare line was Anchor Gretel and Hawkwell Far Too Risky’s foal Greystonegate Juniper won the foal class.
Youngstock Champion and Reserve went to Cornish bred ponies, respectively, Boswarthen No Deal, and Boswarthen Ross Poldark. No Deal, a two year old filly by Dunkery Tawny Owl X Dunkery Brambling, then went on to take the overall In Hand Championship and the top accolade at the end of the day, Supreme Champion, making the long journey from her home county worthwhile.
In Hand judge Michael Dewhurst said “It was a real honour to be asked to judge Exford show especially in the society’s centenary year. Due to the effects of Covid the main show had a complete makeover which meant a new layout for the breed show which worked really well. I was delighted to see so many ponies forward and the quality of the champion and reserve really was outstanding.“
Ridden classes started after lunch and although the junior entries were sparse, the quality of ponies and riders was very high. Lancashire bred Darshill Hawkeye showed the spectators what excellent children’s ponies Exmoors can make winning both lead rein and first ridden, then taking the ridden championship as well as coming second in the Junior Handlers.
Newcomer Jody Wheeler and her Anchor Love Story were Moor bred Ridden Champions.
Portly French took the HOYS ticket with her very consistent ridden mare Blackthorn Poem.
EPS Chairman Nigel Hill said “What a fantastic breed show this year turned out to be! The new layout was well received by members and it was nice to see spectators, sometimes three deep watching the classes. The positive comments from EPS members and the public made all the effort worthwhile. We are looking forward to having an equally successful, if not better show next year.”
2021-EXMOOR-PONY-SOCIETY-BREED-SHOW-RESULTS.pdf (exmoorponysociety.org.uk)