Full details of your legal responsibilities can be downloaded on this page under ‘Passport Forms’.

The EPS is an approved Passport Issuing Office and provides passports for:

The Main Section of the Exmoor Pony Society Studbook

Section 1(Pre-01/01/2016 these passports were beige in colour. From 01/01/2016 EPS passports are white and for Section 1 ponies, the non-statutory pages are beige.) – ponies who meet the breed standard and whose parentage is recorded in the studbook.  The sire must be either a licensed stallion or a registered, vet inspected colt aged three years old or under – the latter being of particular importance to the moorland herd owners who wish to run on a future colt.  Since there is a qualified veterinary surgeon at each moorland inspection, any such colt brought in can be vet inspected on the day – provided the colt passes then the progeny can be registered in Section 1.

Section X (established 2006 in accordance with EU legislation) (Pre-01/01/2016 these passports were blue in colour. From 01/01/2016 EPS passports are white and for Section X ponies, the non-statutory pages are blue) – ponies who have not met the breed standard, ponies who have not been put forward for inspection or ponies who are awaiting re-inspection and whose parentage is recorded in the studbook.  Any who subsequently meet the breed standard and whose sire is a registered, licensed stallion or a registered, vet inspected colt aged three years old or under can be upgraded into Section 1.
Note: Prior to the introduction of Section X, a register of all ponies that did not meet the breed standard has been kept by the EPS and with the introduction of passports in 1999, the Society was able to issue passports of an Exmoor type.  All such ponies would be eligible for late registration upon DNA parentage verification to confirm their identity.

Late registration – where the birth of a foal has not been notified to the Exmoor Pony Society and it is presented for registration after 31st December of its year of birth or aged six months or over then the late registration rules are applied together with the criteria for entry into either Section 1 or Section X of the studbook.

In addition, the Society provides passports for

Exmoor Type Register (Pre-01/01/2016 these passports were pink in colour. From 01/01/2016 EPS passports are white. Exmoor Type ponies are only eligible for an ID only passport – true to type Exmoor ponies where DNA parentage testing has established that either the parentage is unknown or that only one parent is registered in the main section of the Exmoor Pony Society studbook and the pony is not eligible for the First Cross register.

This section includes all the moorland foals presented for inspection since the introduction of DNA parentage testing in 2002 to preserve the integrity of the studbook given that multiple herds were running on one common. All such foals are both on the electronic database and the DNA database held by the Animal Health Trust and Weatherby’s two of the leading laboratories in the world. The DNA database is evolving year on year and work continues to establish the parentage of moor bred foals in the Exmoor Type register.

Passports have replaced the old ‘Certificates of Registration’.
Passports issued prior to 01/01/2004 which do not contain Section IX are no longer considered to be valid passports. Notification was sent to all owners in November 2015 – please check your passports and, if in doubt, contact the Secretary – 01884 839930 or secretary@exmoorponysociety.org.uk

With the introduction of the Central Equine Database, there is now an online equine microchip checker facility.  This 24 hour facility allows access to all PIO equine records, just follow the link
www.equineregister.co.uk

When The Exmoor Pony Society’s office is not manned Grassroots provide our emergency PIO Telephone Support.  The number is 07511 728246. 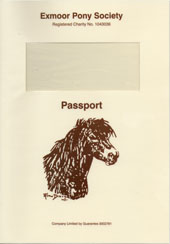 If you still have the old style ‘Certificate of Registration’ and have not applied for a passport or your passport was issued prior to 01/01/2004 and does not contain Section IX then you should return your certificate/passport with the fee of £20 (for members) and £40 (for non-members) to the Secretary. Please also provide a strong self-addressed envelope size about 9 x 6 stamped with the new 2nd Class Large stamp.

The Society will then provide you with the appropriate paperwork for your pony to be micro-chipped and this information will be included in the passport.  The vet implanting the microchip must be a member of the Royal College of Veterinary Surgeons.  The vet should mark ‘M’ on the silhouette to identify the location of the microchip and complete the silhouette and description and then date, sign and stamp the silhouette.  All ponies requiring a passport must be named.

If you wish your passport to be returned by recorded delivery then please obtain the necessary certificate from your post office.

If you have any queries regarding passports then please contact the Secretary (01884 839930 / secretary@exmoorponysociety.org.uk).