History of the Exmoor Pony 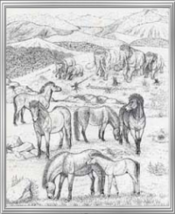 The first wild pony came to Britain from Alaska about 130 thousand years ago. They were very successful and widely distributed throughout the British Isles, living alongside animals such as the Mammoth and preyed upon by the Sabre-Tooth Tiger.

After about 100 thousand years a new, dangerous predator came to Britain – Man. Pony meat was an important food source for the Stone Age hunters and the skins and fat from the animals were valuable to winter survival.

About 9,600 years ago, climatic change restricted the open grazing habitats to mountain and moorland areas. Britain could then support far fewer ponies and these became isolated on the uplands as the British Hill Pony.

When the Celts settled in Britain, ponies from these wild herds were tamed and trained to pull their chariots. The first written records of ponies on Exmoor are within the Doomsday Book when Exmoor was designated a Royal Forest.

to about 1,000 at times. Non-Exmoor mares came to the moor to join the indigenous British Hill Pony type stock but it is thought that the wardens ran native stallions.

In 1818, the Crown sold the Royal Forest of Exmoor to industrialist John Knight. The outgoing Warden, Sir Thomas Acland, took 30 of the ponies and founded the Acland herd (now known as the Anchor herd) running on Winsford Hill. Farmers from Withypool and Hawkridge, who had worked for the warden, also bought stock at the dispersal sale and founded several herds of which Nos. 1, 10, 12, 23 and 44 still exist. John Knight’s attempts to “improve” the ponies through crossing had temporary success but his herd dwindled and died out.

In 1921, those who had been involved with the Aclands and the foundation herds became concerned that their true Exmoor ponies should not be lost to the fashion of the time for “improvement”. The Exmoor Pony Society was founded at the Lion Inn in Dulverton to form a stud book, to register pure-bred Exmoor ponies and to promote their breeding. Several years were spent with highly experienced breeders inspecting ponies for acceptance into the stud book as the foundation stock.

Showing Exmoors away from Exmoor in the early years of the Society sometimes involved quite an expedition. Ponies were walked to Dunster station and then travelled by train to compete at Islington in London.

In the 1930s Exmoors were very popular as children’s’ riding ponies, no doubt in part due to the success of the Moorland Mousie stories. On Exmoor, as they had for generations, ponies carried the farmers shepherding, hunting, to market and even ploughed the land, while the unhandled breeding herds continued to graze the Commons.

The late 1940s nearly saw the demise of the Exmoor Ponies. A combination of owners away at war, gates left open, trigger-happy troops and ponies stolen to provide food for city dwellers left the population decimated, perhaps no more than fifty. In the years immediately after the war Mary Etherington rallied the breeders and together they ensured that cattle grids restored the secure boundaries to the Commons and set about re-establishing their herds.

The Exmoor Pony then has had a very long history in Britain and shared perhaps thirty thousand years with Man. Since the arrival of the first humans it has contributed to our evolution into farmers and then industrialists. Today the Exmoor continues as our partner in leisure and competitive activities while the free-living herds carry on its role as part of the natural fauna of Britain. 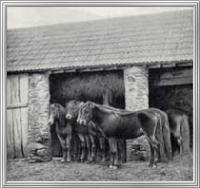 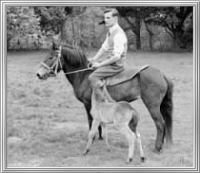 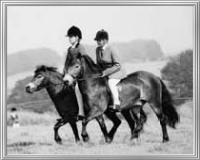 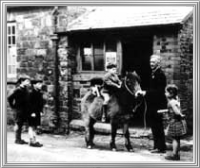